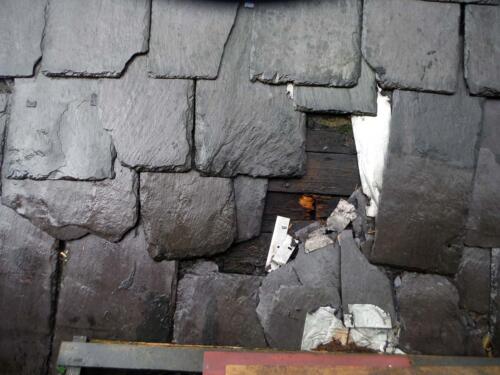 The Leigh Spinners Mills is Grade II* listed and is one of the finest mill buildings in the country. It is an intact double mill complete with engine houses, mill lodge and chimney. The East block was built in 1913 and the West block was built in 1923. At peak production the mill contained over 200,000 mule spindles and 4,800 ring spindles.  One of the highlights of the mill is the surviving steam engine, which is possibly the last surviving engine to have been placed within a mill and the largest of its type.

We were awarded the contract to re-roof the Engine House of the Mill, which due to a rotten truss ends, was in danger of collapse. The works included complete timber repairs and restoration of the lantern.

The original cast iron gutter was removed as it had failed.

The roof had a welsh “tonne” slate fixed directly to a sarking board. The slates were stripped and stacked inside the mill building. As the slates were diminishing course we sorted and stored in size order.

Our joiners constructed the new stepped parapet gutter which was lead covered. The subframe and “penny boarding” with lead rolls was installed. A Tri-Flex lining was applied to the gutter to make it water-tight. After this was completed our roofers dressed and tidied the previously stacked slates ready for the slating.

We installed around seven tonnes of lead on the gutter with flashings and an area of cladding. In our workshop we made three new large lead outlets with overflows along with fifteen code 8 roof vents. Most of the leadwork was completed at the mill, with the lead vents and parts of the outlets being lead welded on site.

Our roofers then started re-slating the roof. We installed a counter batten and slating membrane to the roof. Due to the new stepped gutter detail the first four rows of slating were detailed with a lot of cutting. The slates were all double fixed with copper nails. Any slates with oversized holes or damaged shoulders were cut down. Side lap on a diminishing course roof is critical. The general rule of no small than half the margin was used. We also set out a gauging stick before slating started, enabling the entire roof to be battened. The roofers fixed the slates, working from both sides of the roof to ensure the weight is spread evenly during re-slating.

The lantern was reconstructed with new lead and glazing installed.

The scaffolding for the project was complex as it had to allow our personnel access to the full height windows so they could restore them, while still allowing access for removal of asbestos beneath and ensuring the steam engine was fully protected from any damage. It was also a challenging site to manage as the factory was a live site with various activities taking place that had to be accommodated.

One of the aims for the Mill was to have some space for community use and heritage and art spaces. Our work ensured that the roof did not collapse and that the character of the mill was not changed. We feel it is very important that the original features and feel of a building is retained. We are very considerate as to how we restore buildings and work closely with Conservation Officers.