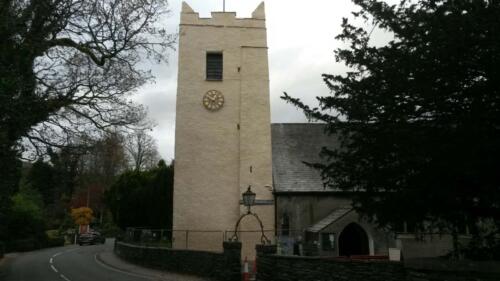 St Oswald’s Church stands on the banks of the River Rothay in the centre of Grasmere and is a Grade I listed building that dates from the 1250AD. Up until the 1890s the church was rendered in lime. In the 1890s the lime render was removed, and the pointing raked out. This was replaced with a cementitious strap pointing. This caused severe damp so further action was required. To try and solve the damp, in 1921 the church was encased in a cementitious pebble dash render.

Surprisingly, the cement render survived until 2010 when it began to delaminate from the external western façade of the tower. Large sections of cement were coming loose from the tops of the parapets and this raised health and safety concerns.

We were contracted to remove the cement based mortars, repair the masonry and re-introduce a lime mortar, along with repairs to the roof. We were awarded the contract as we had the knowledge and experience of hot-mixed mortars and the labour force to carry out a project of this size.

Believed to be the largest hot-mixed lime render project in recent history undertaken in the UK, we worked with Crosby Granger of Kendal, Conservation Architects, and with English Heritage to devise a hot lime mortar mix and limewash colour suitable for application upon the tower.

One of the conditions of the planning permission was that a series of mortar biscuits and trials would be carried out. We produced 42 mortar biscuits using different hydraulic additives. These were left for 28 days to establish the pozzolan’s effect on the initial set of the mortar. Only two of the 42 samples were favoured. To minimise the loss of free-lime, the mortar with 5% Argical was selected. We chose to use powdered quicklime as there was a concern that unslaked lime may ‘pop’ within the render once on the wall.

The scaffold access was key to the success of the project. This took approximately four weeks to erect as it was designed not to be tied to the building in order to avoid disruption in the rendering application. The scaffold was fully sheeted with a temporary roof to prevent delays occurring from the British weather. No loading could be made upon the fragile nave roof, therefore the scaffold was cantilevered and beamed.

On a restoration of this scale it was anticipated that issues would be uncovered as the work progressed. We found that the cementitious render was extremely thick and had been deep filled between the masonry resulting in a strong adhesion. In total, it is estimated that we removed around 40 tonnes of cement render and pointing.

Westmorland Green slates were found to be on the West pitch of the tower roof, however on the East pitch were Elterwater slates. Especially for the project, due to the latter no longer being produced, Burlington Stone were able to manufacture Brandy Crag slates with a flame tarnish to achieve the closest match. The re-installed slates and sourced Burlington slates were oak pegged in-keeping with the original methods.

Interestingly, the former pitch of the nave roof was discovered during the project, which is thought to have been thatched. This is now marked at the historic ridge position by two protruding slates upon the East elevation of the tower.

During the rebuilding of the pinnacles we also found what is believed to be the original lower height of the castellations which was indicated by a change of stone.

The three clock faces were restored by the Cumbrian Clock Company who gilded the clock faces and restored the dials, as well as re-installing them with an automatic wind capacity.

During the works we hosted two Building Limes Forum events where a variety of delegates and members of the public were given an insight into the history of the project and provided the opportunity to remove render and apply some hot-mixed lime.