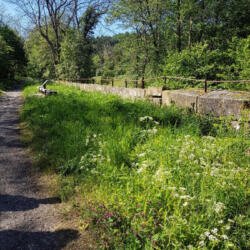 Twin Arch Bridge is an impressive structure that was built around 1847 when the Whitby-Pickering railway was upgraded from horse to steam power. Although the main railway was diverted away from this bridge in 1865, it remained in occasional use until the early 20th century. The bridge now carries only walkers on the Rail Trail path over the Murk Esk. The Land of Iron project, funded by the National Lottery Heritage Fund, provided the opportunity to conserve these structures. When we arrived on site the parapet walls were overgrown with trees and shrubbery growing out of the walls. The roots of the vegetation had dislodged the masonry to such an extent that the wall was in a precarious position.

As such the decision was to take to manufacture a new bridge and install this in its place. The first port of call was to remove all the vegetation affecting the bridge and dismantle the existing pilasters. Once this work had been completed, we could begin the rebuilding of the pilasters, it was soon discovered that additional masonry units would be required. We procured the new units from a quarry just 4 miles from the bridge. It has been suggested that the stone is such a good match that this could be the original quarry used in the original construction of the railway bridges.

Upon completion of the masonry works, we brought in the new bridge which is constructed from galvanised steel beams and reclaimed oak railway sleepers. It was decided that the new bridge would be installed centrally to the pilasters as opposed to the previous bridge which was offset. Once the bridge was installed, we reinstated the track up to the bridge with cinders sourced from a local steam engine repair workshop, this keeps the track in keeping with the rail trail.

As the Twin Arch bridge is located on a Site of Special Scientific Interest great care had to be taken every step of the way to ensure no lasting damage was caused to the surrounding areas while the works were undertaken. To ensure no debris fell into the river we installed a suspended tarpaulin system that spanned the bridge underneath the string course. Once this had been installed, we carried out the deconstruction and removal of vegetation from the parapet walls and the string projection course.

Once deconstructed we commenced with the rebuilding of the pilasters and parapet walls. We had the original lime mortar analysed which gave us a specification to produce a mortar that closely matched the original. This was produced using hot lime and a local sand. During the reconstruction of the parapet walls we found that several new stone units was required.

Following the completion of the rebuilding of the parapet walls we installed a galvanised railing system to the same design as the original. Due to the river scouring out the banking we brought in sandstone rock armour from the local quarry and installed these in a way as to divert the stream away from the banking and thus preventing any more scouring out of the banking.  To complete the works, we laid cinders on the track.

‘Tom Mutton, Land of Iron Programme Manager with the North York Moors National Park said “These bridges are a really important part of our local industrial heritage yet were in a very vulnerable condition and at great risk. They are also located within a sensitive natural environment, amongst ancient woodland and over exceptional freshwater habitats. Furthermore, access to site is difficult and the popular Rail Trail footpath uses the bridges. UK Restoration Services approached these challenges with care and creativity, protecting the surroundings whilst carrying out first class conservation work. We are delighted with the results and that these bridges are now secure for many future generations to enjoy.”’