St. Peter’s Church in Rylstone is a Grade II Listed building near Skipton, North Yorkshire, in the Diocese of Leeds. There has been a church on the site for centuries but the current building dates back to the 1850s, when it was restored. But in that case, restoration meant almost complete demolition and rebuild by Lancashire architects. Thankfully, in 2022, our restoration was nothing as severe. 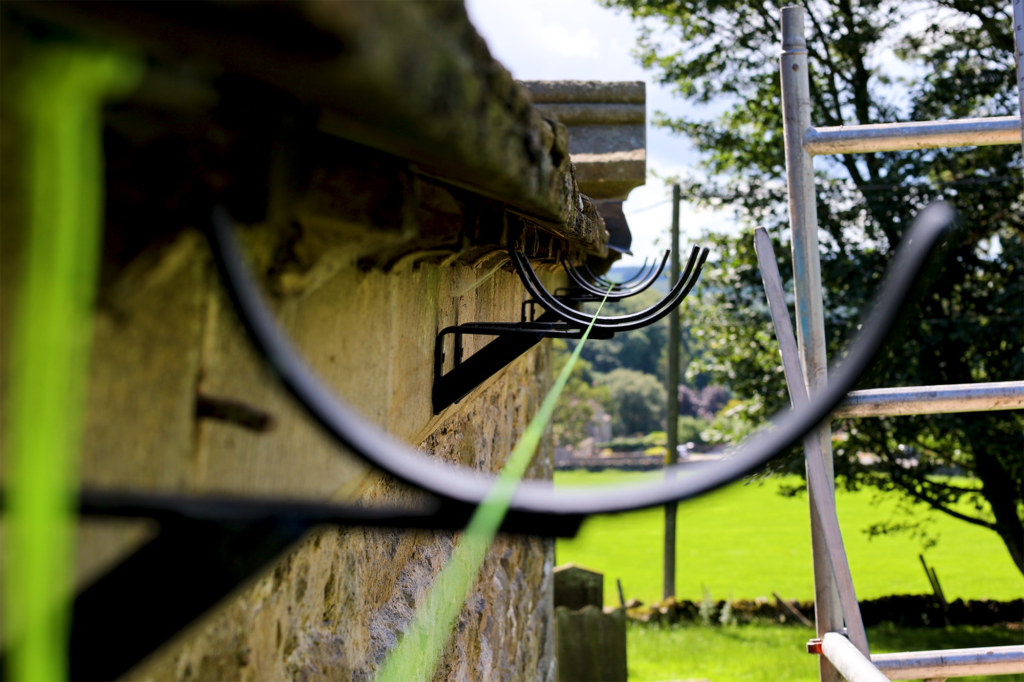 What did need entirely removing though, was the guttering on the north aisle. In order to properly clean it, we took down a large segment of the cast iron guttering. It was sand blasted, cleaned out and repainted, so it was as fresh as possible. We also needed to make new brackets to hold the guttering. As these specialist brackets cannot be purchased from stores, we turned to our metalwork department. Specifically, our man Dan in our metal workshop. He made stainless steel brackets to precise specification, for installation in the north aisle wall. When we reinstalled the gutters, we also put in two downpipes to help with water flow.

The stone slate roof had taken some damage and some slates needed replacing. In some instances, the slate damage had led to water ingress that had rotted the internal purlins (see purlin repair). A number of slates on the south aisle were delaminated and cracked. We removed them from the roof, brought them to ground level for some patch repairs, and then re-affixed them. In a minority of cases, some slates were beyond repair. In this situation, we fabricated brand new slates, measured precisely to the outgoing slate, and replaced it like-for-like.

Also on the south aisle, water ingress had led to further roof damage. In one particularly damaging instance, the roof had come through and gone underneath the coping stones. To rescue this, we pulled the stones and roof back and installed a lead-lined secret gutter. This took the form of an upstand with a lead core roll on it, forming a roof-level gully. With this secured in place, we re-laid the copings. This means that any water coming off the copings in rainfall will run into the secret gutter and then flow down into the castiron gutter below, securing the roof from ingress.

Rope Handrail in the Tower 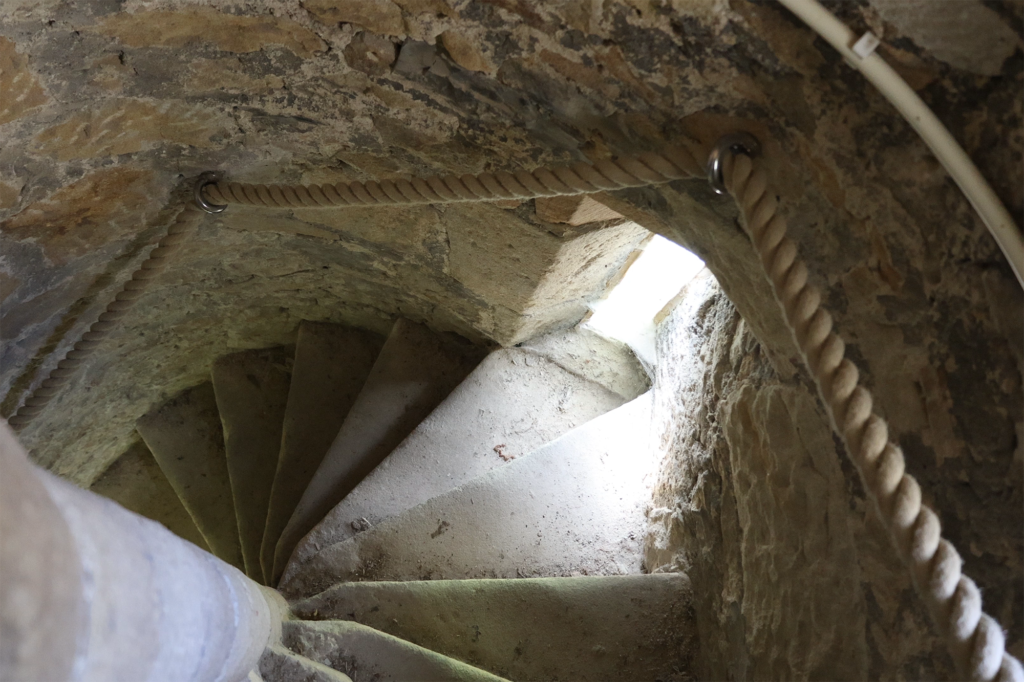 The tower at Rylstone is 17 metres high, and the 1850s restoration/rebuild actually extended this by around 10 feet. Like many church towers, the internal staircase is spiral and extremely narrow. To aid bellringers ascend the tower, a thick rope handrail was installed on the outside of the steps. We embedded a series of rope hooks up from the door to the ringing room.

New Ladder in the Ringing Room

At the top of the spiral staircase is the Ringing Room. As part of our big cleanup, we also needed to remove a lot of debris and detritis from the crevices of this room. The big job was the installation of new ladders which led to the bells themselves. Previously, access to the bell room was supplied by an old set of wooden ladders. While the ladders were clearly well-built, the wear and tear of decades of use was clearly visible. We replaced these ladders with a brand new stainless steel set. These new ladders were completely vertical, so a caged safety system was also included in the set. Although the old wooden ladders no longer lead anywhere, we’re leaving them in the Ringing Room for posterity.

Lime Pointing the Top of the Tower 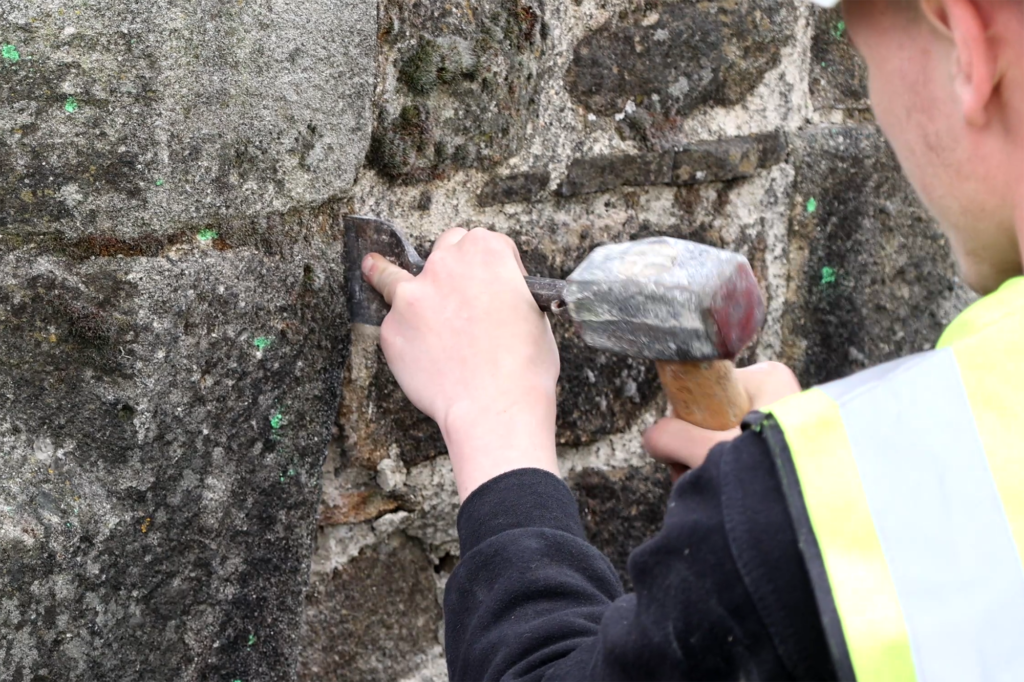 In partnership with the Rylstone architect, we went round the top of the tower to identify parts of weakness in the mortar. A lot of the joints had been repointed in the past with cement, which is not ideal for limestone bedding. We raked out the previous mortar and repointed it with our lime mortar mix, allowing breathability in the stone. We also had to rebuild a few sections which we could see would fail in the future as a result of previous pointing attempts. These rebuilds and repoints ensured the stability of the tower for years to come.

The water ingress from the slate damage had rotted a couple of the internal purlins. We stripped back some of the plasterwork and roof slates so we could extract the rotten ends of the purlin. We sawed off the ends, and affixed a brand new piece of oak, cut precisely to size. In our metalwork shop, Dan frabricated some stainless steel shoes to keep the new purlin attachments in place. We also had to cut the rot out of the principal rafter and this steel shoe acts as the main support to these rafters.

In addition, there was a large wooden wall plate that had also rotted as a result of water ingress. We removed that entirely, and installed some concrete lintels. This was in order to better support the rafter and spread the weight more evenly. We finished this stage by replastering the area and putting the decorative timber cornice back on. 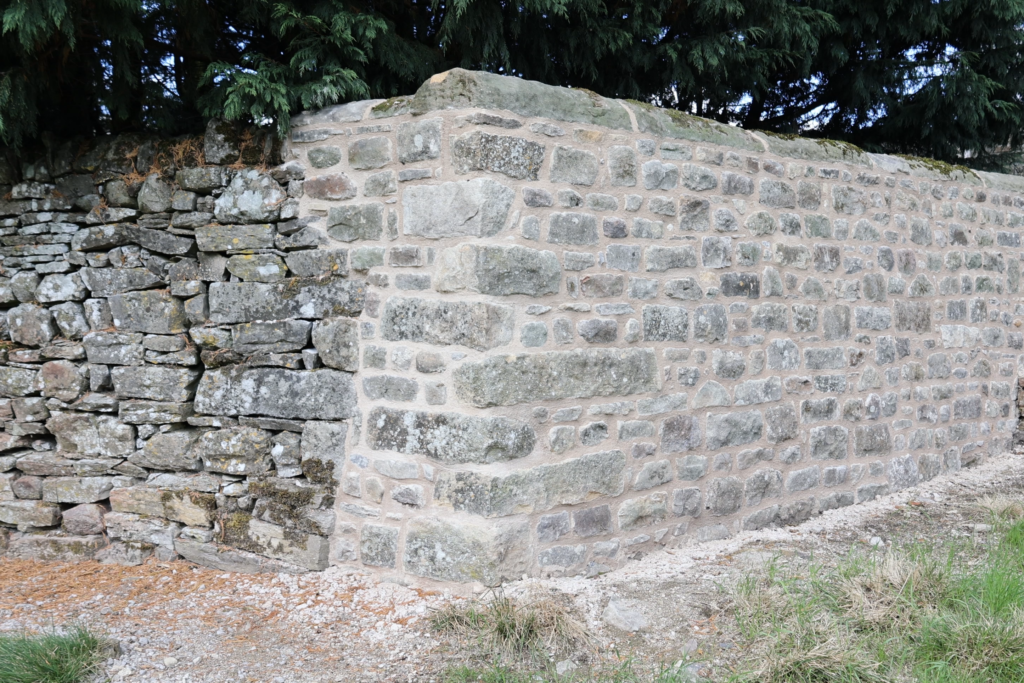 A large ash tree had taken up residence in the middle of the stone wall on the perimeter of the church grounds. In order to extract the stump, we had to tear down the wall to facilitate the removal. The stones were carefully taken stock and rebedded in the wall with a lime mortar. It was rebuilt to how it would have been initially built, before decades of weathering took effect.

We’re delighted to get this one complete. We’ve been hard at work over in Rylstone for almost four months and with so much to do, you can see why! Proud of this one though. Don’t forget to check out our YouTube for more videos of our projects, including all the Rylstone progress.