What Is A Drainage Survey?

As part of our skill set, we offer up drainage surveys to buildings that require them. We did one this week as we went to the beautiful St. Wilfrid’s Chapel in Penrith. And you can watch a video of a drainage survey in action below.

What Is A Drainage Survey?

Essentially, a drainage survey is an inspection of the pipework and drains of a building. A survey can be used to identify drain failures, leaks, corroded areas, or blockages. In this case, St. Wilfrid’s drains were suffering some blockages and there was uncertainty as to where water drained off. We have often had to do drain surveys when starting a groundwork project, to make sure we’re not affecting the drains. We recently restored a cobblestone driveway in Salford which required a thorough investigation. 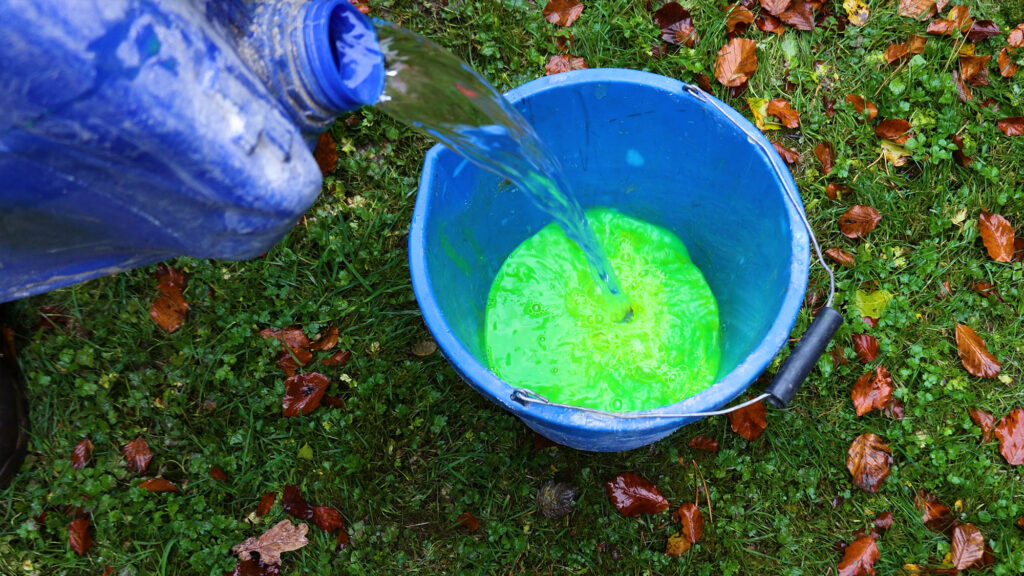 We took dozens of litres of water with us to investigate where the flow of the drains led. Because of the age of the building we only had the architect’s estimates of where the drains flowed. The main point of exit was indicated to be a drain pipe slightly downhill of the chapel in the field. To track the flow, we used a special dye to turn the water bright green so we’d be able to see it flowing out anywhere.

The dye is completely non-toxic and does not damage either the water or the surrounding area into which it flows. It might like a little radioactive, but it’s perfectly safe. We poured this luminous water into the drains and attempted to track its flow. Unfortunately, not a drop came out of the designated pipe so we figured it might be blocked. The drains on the church were not roddable, meaning we could not drop long rods down them to beat the blockage. As we worked our way around the church, some drains were very obviously blocked. Some flowed more freely though, but wasn’t emerging anywhere obvious. So we needed to take a deeper look. 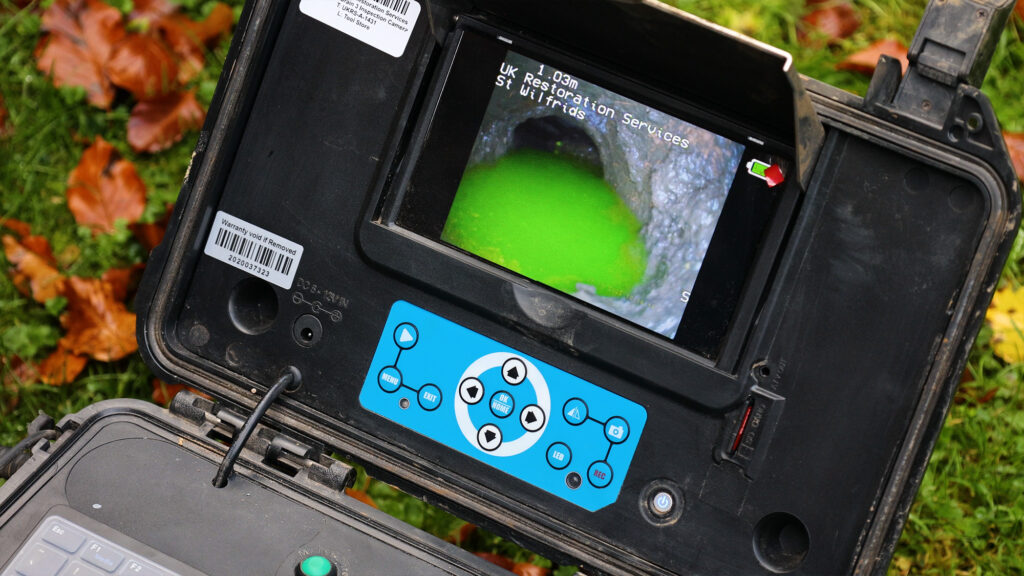 Getting The Camera Down

Obviously getting a camera down the pipes requires a special camera. Unless you’re up for tying your mobile phone to some string and sliding it down. But no need for that, we have a special draincam for this very thing. It is attached to a special laptop via a long cable that is reeled out from the unit. The camera lights up and sends a live feed back to the laptop screen as it is sent down the pipes, and we can see where the problems lie.

There are some restrictions; it can’t move around tight bends or upwards, both of which we came across. Because the camera is only operated by gravity and a bit of a push, some obstacles are impassable. You can normally travel for several metres but in this case we often found ourselves stopping after a metre or so. What we did find was a few puddles of luminous green water and some damaged culverts. But, crucially, no vast quantities of water, meaning the ones that were draining were draining freely. But, to where? We poured the remaining water down the drains to try and pierce any strong blockage. 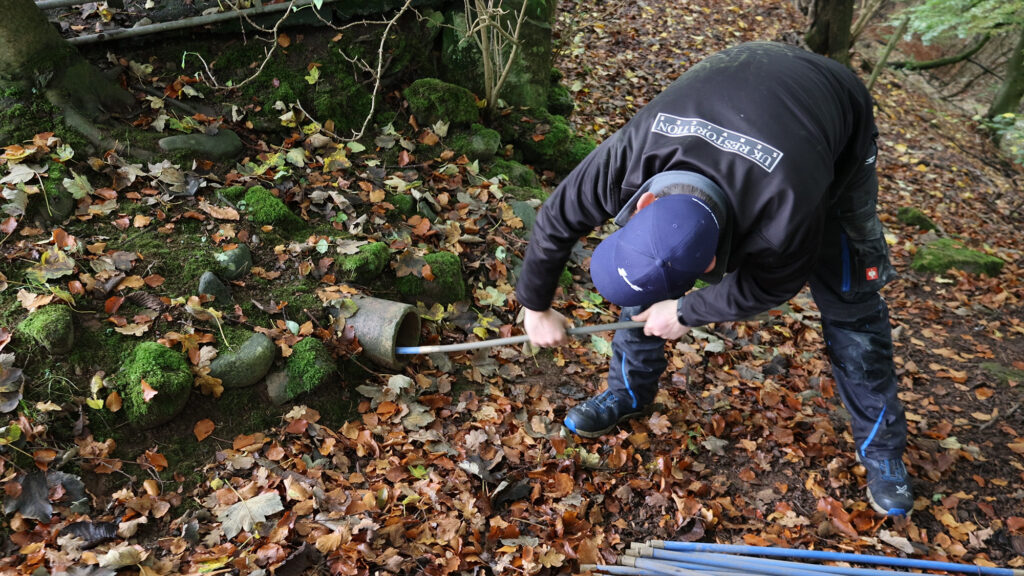 One drainpipe was roddable, the one the architects had picked out as the possible exit point. With no water coming from it and the camera coming up against a blockage in an upwards direction, we went in with the rod. This is a modular pole made up of flexible fibre which can worm around a pipe as a bendy battering ram. Any big blockage can be demolished from several metres back. However, as we pushed the rod into the pipes and found the exit, the news was disappointing. The pipe led upwards, onto the stone base of a nearby wall, and was not connected to the drains of the church at all. The assumed pipe exit was a bust and was used only to help irrigate the land. 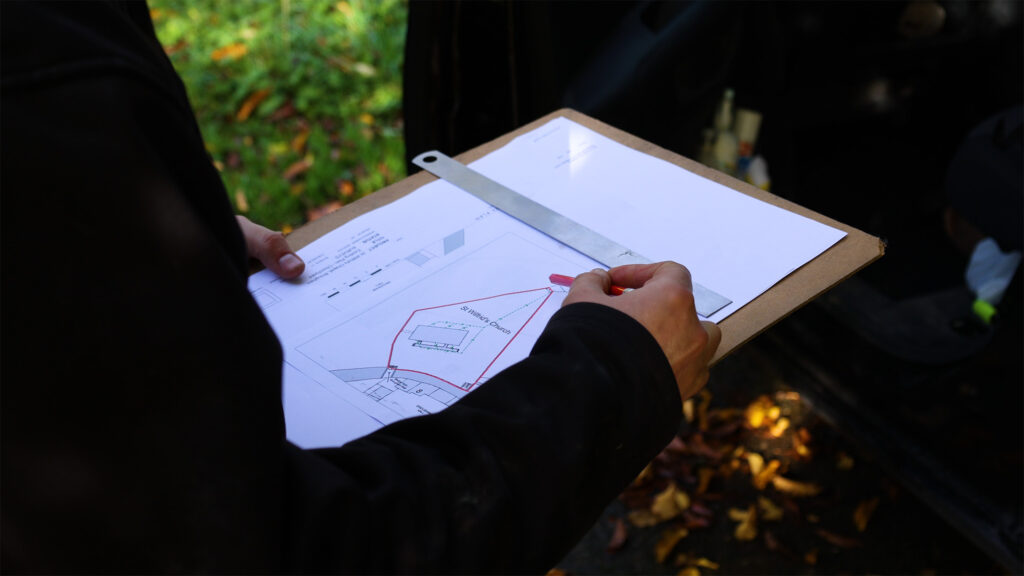 We didn’t get the answers we wanted out of this survey. We concluded the water must be draining into a land drain, out of sight and under the hills. The green-dyed water never re-materialised after a thorough search of the private and public grounds surrounding the church. We can only do so much and unfortunately in this case a specialist drainage company would be required. But we were able to identify where the drains were blocked, how far into the ground the pipes were damaged, where the water was running smoothly and roughly in what direction. Unfortunately, we fell short of a definitive answer, but we did manage to answer a lot of questions for the client.